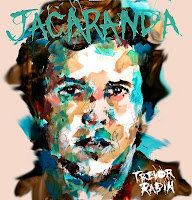 Yes, that's right. It's jazz fusion. And it's very good. This is what Trevor playing a guitar with no pop influences with a bit of jazz thrown in can sound like, and I must say I love it! I'm not a big fan of his 80s pop tunes, but I really liked parts of Talk—especially "Endless Dream." When I found out he had done a new solo album I must say I was a bit skeptical, but I was also a bit excited; after all, his film scores have been sounding pretty exciting. And then I heard reviews that said the new album leaned toward jazz fusion, and I was even more intrigued.

It definitely doesn't disappoint (well, it might if you're looking for "Owner"—no repetitive pop riffs here!). The CD is a nice ecclectic mix of jazz and rock guitar playing, along with one track, "Rescue," featuring very nice female vocalizations and orchestrations remixed from one of his soundtracks, and a very nice piano solo as well (yes, you heard me right—a very well played, nicely composed 4 minute piano piece!) that leans more toward classical. I've really enjoyed this CD!

After listening it again today I went and found a nice video Trevor has made for one of the tracks. Check it out:

Also, Trevor was recently featured on "The Score," A weekly radio show from Portland Radio station AllClassical.org exploring film music. It's an hour-long show featuring interview snippets, segments of his movie scores, and the Jacaranda track "Rescue" almost in its entirety. AllClassical.org doesn't have the show archived on their site, but you can find it on google; here is one radio station that has it as of the writing of this post: A Conversation with Trevor Rabin 12-27.
Posted by Paul Erdman at 8:00 AM

All comments are moderated and will not appear immediately.

The Classical Connection is a cross genre musical celebration, exploring the many relationships between progressive rock and classical music. This blog serves as an interactive counterpart to the main site, providing me a more fluid medium for sharing my musical discoveries with fans of the show. I hope you enjoy!
-Paul Erdman
Creator of The Classical Connection